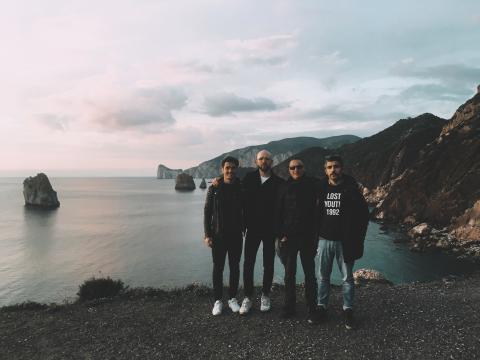 Not even January can stop the sun shining on Sardinia.

In the early days of 2020, the English producer with Sardinian origins, Dominic Murgia, and the visionary and talented director from London, Joe Connor, landed in Sardinia to join the crew of Lùgere for a great tour inside the southern coasts of the island.

Dominic and Joe came back to meet again with our members from the young production company of Mommotty. Among their most important and famous collaborations there is in fact the famous production of the music video for the English band Placebo, for the song Jesus Son, shot in the west coast of Sardinia in the colorful summer of 2016.

In this new location scouting, on the first day of the tour, the crew visited the city of Cagliari, in particular the “Bastione” and the ancient castle neighborhood, the Contivecchi salt flats, the white beach of Poetto, the Marina neighborhood with its characteristic narrow and colorful streets and the small and suggestive gulf of Cala Mosca.

On the following day the group moved further south-west on the island, going to explore the Sulcis area, the beautiful beaches of Chia, Su Guide and Cala Cipolla, Tuerredda, Portu Tramatzu, Porto Budello and the port of Teulada during one of the most beautiful and sun-shining days of the entire winter in Sardinia.

During these first two days of travel, it was not only the magnificent landscapes that remained in the heart of the two English artists, but the magic spirit of Lùgere mission was revealed in its most intense form: it was great to see how creative ideas for new artworks were coming out at every new corner, behind every turn, over every dune, under every tree and every high cliff on the sea suddenly discovered.

During the third day of scouting, in particular, the group had the chance to join forces and discover some of the most suggestive places on the island. We are talking about the coast between the villages of Nebida and Masua, the magnificent glimpse of Pan di Zucchero and the ruins of the Laveria Lamarmora. Together with our guys, Joe and Dom experienced a breathtaking sunset at one of the less mainstream locations in Sardinia, but certainly one among the most intense and magical places on the island.

Before leaving, during the fourth day, the two artists, still eager for discoveries and creative ideas, wanted to think of a return not too far in time, perhaps for some work with an attractive and spectacular look, which was already taking form in their minds. And we, the Lugère team, are already at work to bring them back under the warm spring sun.

The second week of January 2020 we made one of the last incoming missions on behalf of Lugere. We hosted Paul Rognoni, producer of Mareterraniu, one of the most important audiovisual realities in Corsica, together with Lara Fremder and Emanuele Milasi, both screenwriters who are working on the screenplay for the…

FROM ONE ISLAND TO ANOTHER: BLINDSIDE AND REVOLUTION FILMS
22/12/2019

A few days before Christmas, Andrea, Enrico and Giulia welcomed in Sardinia a new and an old friend on the occasion of the last incoming mission scheduled for this year.

Anthony Wilcox, assistant director and producer, now runs the Blind Side Films, a production company based in the UK, he is also an award-…

The Lùgere team never stops! Indeed, in the second week of April, Andrea, Emanuele and Giulia went to Cannes for the international market for content development and distribution (MIPTV) in Cannes, organized by Reed Midem.

We successfully promoted our readymade films and contents, among which the short film…

April has been a very busy month. Since its first week we had the pleasure to host some friends from Bogota, Colombia.

They are Catalina Figueroa and Manuel Gordillo, from the sound production company of La Tina Sonido. Manuel is a sound designer with a degree at the Berklee College of Music, where he…

Between the end of February and the beginning of March, we had the pleasure to welcome the French production company Picofilms to Sardinia.

We travelled all together through the inland of the island, to discover some of the most traditional Carnival customs, passing by beautiful cities…

Nicola, Andrea, Emanuele and Enrico are ready to take off for the Berlinale 2019. Our team will be at the European Film Market from the 7th to the 14th of February at stand n. 133 and their agenda is getting quickly full of meetings with companies we believe we can partner up with and have fruitful collaborations…

One nazist plane crashes into the mountains around a small village in Sardinia. A man, alone, witnesses the accident: Salvatore. He runs through the woodlands, before the night comes, to reach the crash site. When he comes, something strange has already happened. The pilot has…

First team Lùgere experience for three of our guys, Matteo, Federica and Andrea, on the occasion of the event FOCUS 2018, which was held on the 4th and 5th of the last December, inside the Business Design Centre in London. The event was organized by the important British website The Location Guide.